The branch entered its 81 st year in 2013 and saw continued growth in numbers, topping 180 due
mainly to the reputation built up by the branch since the establishment of our Introductory Course
which over 40 delegates regularly attended.

2013 also saw the successful application for grants. One of which amounted to £3500 and was spent
on equipping four loan Hives, four microscopes and the balance on marquees and banners for our
public displays.

Towards the end of 2013, an opportunity arose to acquire a licence on a 1.5 hectare patch of land at
the junction of Dalehouse Lane and Stoneleigh Road for use as a training and community apiary. This
was seized and preparatory work under the direction of Mick Smith as the interim site manager was
commenced. In early 2014, we managed to acquire an anti-vandal portacabin from a local charity
which was winding up for just the cost of transporting it. The hire of a digger in the hands of Roger
Wilkes under the direction of Mick Smith saw the portacabin installed, providing a store, kitchen and
classroom. Later, a separate, grant funded, composting toilet was installed much to the relief of
senior beekeepers.

Membership continued to rise aided by the expansion of our outreach activities such as displays at
the Kenilworth Show, Leamington Peace Festival and various village fetes throughout the district,
the introduction of Taster Days and the continued success of the introductory course.
Dissatisfaction with the role of the County organisation came to a head at the 2016 WBK AGM when
proposals for reform were aired at the instigation of WLBK’s Tim Foden and Doug Nethercleft of
Shipston Branch. Although these were not accepted at the time, they set in train a review of the
constitution and governance of the County organisation which, under the Chairmanship of Celia
Davis and further developed by David Blower, resulted in reforms which addressed many of the
concerns originally voiced.

2016 turned out to be the start of a rather disruptive period for WLBK. Early in the year, plans were
announced for road improvements which would take up a large part of the training apiary at
Dalehouse Lane. It transpired that, whilst these necessitated the removal of bees from the site, the
storage facilities could remain. With the prospect of having to vacate the site, our search for an
alternative resulted in the training apiary moving to part of the BBKA apiary at Stoneleigh.
This was effected over the winter of 2017/2018 under the direction of David Philips who had taken
over from Ray Summers as apiary manager.

Relocation was very much the “in” thing in 2017 as s the honey extraction unit, then housed at
Southcrest Farm, needed to be moved to make way for redevelopment. Fortunately, the landowner
was able to provide better accommodation at Hurst Farm so that cloud had a silver lining. The site
could accommodate not only the extraction unit but also storage for the bulk ambrosia containers
and other equipment. The move was completed over the winter of 2017/18 in readiness for the
coming season

However, in mid 2018, BBKA required the vacation of the training apiary site for an extension of its
own apiary activities so we were on the move again. This time we managed to fall on our feet by
securing a site at Kings Hill Nurseries which brought with it ample parking, storage facilities and
access to a lecture room. So yet again, members spent the winter preparing a site for the training
apiary. Despite these challenges, training was able to continue uninterrupted.

2017 saw the withdrawal of Tim Foden from WLBK affairs due to health issues. Tim had been
Chairman in 2009/10 and subsequently Branch Secretary until 2017 and had used his managerial
skills to steer the branch through the explosion in membership, the extension of the facilities
provided to members and the application of digital technology to the management of the branch.
With his departure, over 37 different roles previously fulfilled by Tim were identified. More than fifty
members attended his funeral in 2018.

Despite this disruption, membership continued to rise reaching 282 in 2019. Over 20 different
services were made available to members at no, or little, cost and an increasing number of members
became involved in delivering these, thereby boding well for the future. 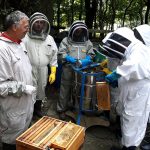