The early days of War led to an initial decline in beekeeping and membership. Mr Weiss was unable to attend the AGM in November 1939 because he was on police duty. He resigned as Treasurer as “owing to various war-time duties, Mr Weiss did not feel that he could give sufficient time to the affairs of the Association”.

At this meeting, members were urged “to increase their stocks if at all possible as it was of National importance that beekeeping should be kept going during these days of war.” The branch purchased 1½ tons of sugar for distribution to members to overwinter bees, and efforts were made to recruit new members.

The Government introduced a sugar ration of 10lbs per colony, and this seemed to coincide with a growth in membership. By 1941, the branch had 80 members. Meetings were held in the afternoon due to “blackout difficulties”, and members were encouraged to enter for examinations to improve standards. Branch members donated honey to the Red Cross and submarine crews. 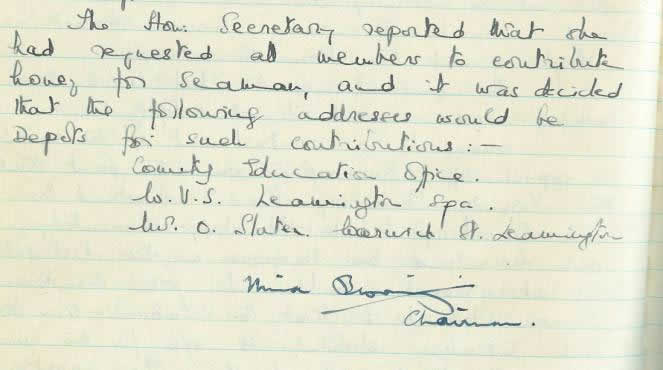 Original record of the request for Branch members to donate honey to Seamen during WWII.

Links were made with Leamington Horticultural Society, with a joint “exhibition of films on horticulture and beekeeping.” There were regular demonstrations, often in the garden of the chairman Miss Ironside, and various “experts” volunteered to run lectures. There was also a close relationship with Solihull Branch, which gave a donation of “£2.0.9, being the proceeds of an auction of Queens, as the branch funds were very low ”.

Mr Harrison Ashforth, of Ashforth Feeder fame, gave a series of 10 weekly lectures covering the entire stages of beekeeping. These were very well attended, despite the severe winter weather of 1946-47. The branch presented him with a pipe and tobacco in recognition of his great services to the branch.

There were occasional outbreaks of Foul Brood, and beekeepers were warned to keep alert. The annual honey shows were re-started, many held in association with Leamington Horticultural Society. The branch ran a conference in 1947, and this success was followed by the 14th International Congress being held in Leamington in 1951. Bee Week, a week of demonstrations and lectures in May, was established to promote beekeeping to a wider audience. This was also the time when members started to “co-operate in sending hives to the Heather”.

In the 50s, the branch apiary was established in Hampton on the Hill with Mr Roberts in charge and it was the site of many happy meetings. It was around this time that a branch library was set up with a gift of books from Sutton Coldfield branch Arthur Denyer had suggested setting up a library four years previously but was out-voted). Bob Grey of Knowle School was the librarian and he also used the books for his school bee club.